Thoughts and perspectives from the team. 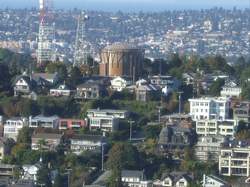 The project, located at a fire station atop historic Queen Anne Hill in Seattle, WA, included demolition of two existing riveted steel water standpipes, one of which was encased in a masonry facade, and erection of a new larger water reservoir. The location itself presented many challenges as the narrow, twisting roads through the old residential neighborhood leading to the site severely limited delivery access and required significant coordination throughout the project. The new foundation consisted of 22 ½ tons of rebar and 550 cy of 4000 psi ready mix concrete to anchor the new 75’ diameter x 61’ shell high (77’ overall height, including the knuckle and roof) water reservoir. The reservoir itself contains approximately 490,000 lbs of steel and features extensive architectural detailing including 8 main pilasters and 16 secondary pilasters and both upper and lower halos. These architectural details were added solely to provide the Owner’s desired visual effect. The tank has a prominent location atop the historic hill and is visible throughout much of the City. The Owner’s artistic vision for the tank was for the architectural detailing to be reminiscent of a Queen’s crown to reflect on the neighborhoods name of ‘Queen Anne Hill’.

T BAILEY, INC. was awarded the Steel Tank Institute & Steel Plate Fabricators Association 2014 Tank of the Year Award in the Standpipe category for the Angel of the Winds project.

2010 STI/SPFA Fabricated Product of the Year