Thoughts and perspectives from the team.

2010 STI/SPFA Fabricated Product of the Year 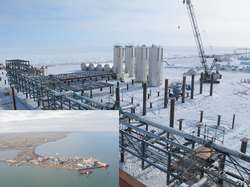 On 2/9/11 Eni began oil production at the Nikaitchuq field, located offshore the North Slope of Alaska at an average water depth of 3 meters. The field, which is Eni’s first operated Arctic project, is 100% owned and operated by Eni with recoverable reserves estimated at 220 million barrels of oil. Nikaitchuq is expected to produce for over 30 years with peak production of 28,000 barrels of oil per day. Nikaitchuq’s full development will be through 52 wells (26 oil producers, 21 water injectors, 5 water source/disposal wells) of which 22 onshore and 30 offshore, with the latter drilled from an artificial island. The processing facility has been completed and 12 onshore wells have already been drilled with the remaining wells to be drilled by 2014. The Nikaitchuq wells, which benefit from the application of several of Eni’s proprietary technologies, are leading-edge since they combine a vertical depth of 4,000 ft with a horizontal reach of up to 20,000 ft. The offshore facilities are connected to the onshore facilities by a under sea bed pipeline bundle, which is the heaviest bundle ever installed in the Arctic. The facilities have been designed and built using technology aimed at minimizing the impact on the environment: zero flaring, pipe-in-pipe technology for hydrocarbon transportation, spill containment devices in all modules and low emission turbine generators. The processing plant is capable of treating 40,000 barrels per day of heavy crude with sand and up to 120,000 barrel per day of water. These facilities will allow Eni to ship sales-quality crude oil through the Trans-Alaska oil pipeline, with no need for further processing.

T BAILEY, INC. was awarded the Steel Tank Institute & Steel Plate Fabricators Association 2014 Tank of the Year Award in the Standpipe category for the Angel of the Winds project.